I have had a desire to go to Glasgow for a long time now. I have been to Edinburgh twice and I thought it would be interesting to visit another large Scottish city. I did my research on websites and blogs and in general people were saying Glasgow lacked the appeal and drama that Edinburgh is so famous for. I am the kind of person who managed to find beauty in Sheffield and Nottingham (but not in Birmingham – yet!) and I like to challenge other’s opinions so when I spotted a return ticket for only £24 I quickly booked it and thus decided to go on a Saturday day trip to Glasgow. I took me 3.5 hours to get there, with a change in Warrington. I am well familiar with this line and I always enjoy the views once we go past Lancaster so all in all it was a nice journey. Interestingly, it was pouring down all night before my trip, it continued in the morning, and it was still raining heavily as we went past Carlisle but as soon as the train crossed the border – I was watching it closely on the Google maps app – the rain miraculously stopped. There was a bit of a drizzle when I arrived in Glasgow but by 10 am it was almost gone. It got really warm and there was even an odd ray of sunshine. I was dressed for the Highlands – down jacket, hiking boots etc. but better safe then sorry…

My first impressions were good. The central station is beautiful, I would even say elegant, the toilets were very clean and so was the city – it must have been tidied up in the very early hours in the morning, after Friday night partying and drinking. My plan for the morning was to have breakfast, then to see the Cathedral and Necropolis. I had booked a slot at The Purrple Cat Cafe for 12:30 so had to keep an eye on my watch, or should I say Fitbit. I had researched recommended breakfast spots in Glasgow and chose to eat at McCune Smith. This was easily the best full brekkie I have ever had, with well seasoned beans, delicious black pudding and a tattie. I don’t know where they get their dairy and eggs from, it was all amazingly tasty and I wish I knew where to get such ingredients here…probably not from Aldi, haha! This breakfast kept me going for the rest of the day, and as my Fitbit proved later, I walked for a total of 26 km. Well worth paying £10.50 – oh, and the coffee was very good also.

To my delight the rain stopped and I was able to get my camera out. I already had taken some pics with my phone, while holding my umbrella with the other hand. Below are two stunning murals depicting patron saint of Glasgow, St. Mungo and his mother, Teneu/St.Enoch:

Glasgow is famous for its murals and I came across several more, without even trying to find them:

I took me at least an hour and a half to wander around Necropolis. I liked the cathedral but this one was small, almost cosy compared to the likes of Durham or York. I can honestly recommend Necropolis as a ‘must see’ in Glasgow. Everyone who was once someone in Glasgow’s old days lies buried there. I could have spent a whole day admiring the intricate tombs, it was like an open air museum. However, I still had plenty more to see so I headed down to High Street, which lead me to The Purrple Cat Cafe. 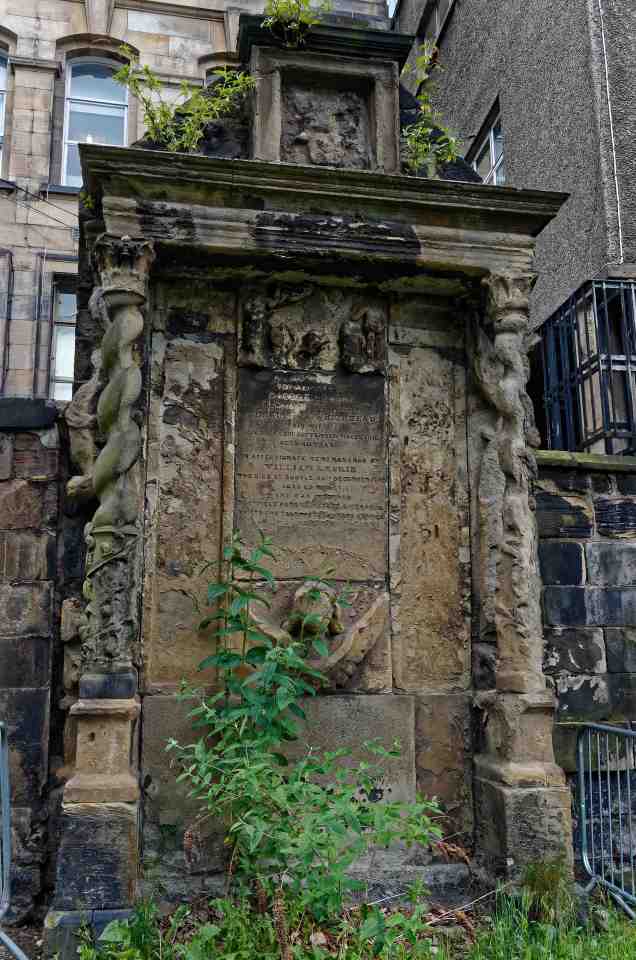 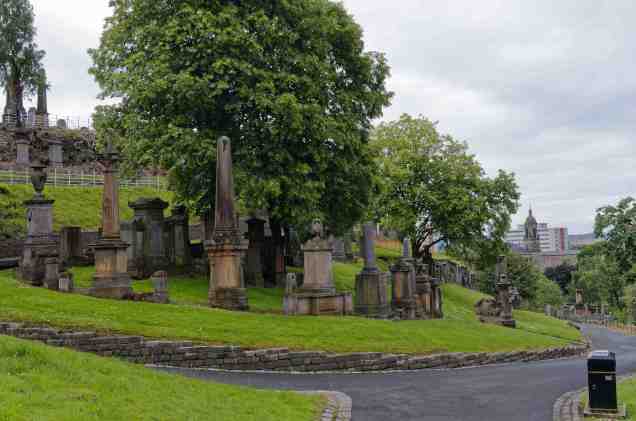 Of all the cat cafes I have been to, this was the most CAFE-like kind of cat cafe…Everyone was asigned their own table with a number on it, we were waited on, it was like the cat experience was an addition to having a light meal rather then the other way round. I did enjoy it very much even though it was too dark inside to shoot without a flash and I had to use my phone instead. They had a couple of very inquisitive and utterly charming tiny kittens. I even hand fed one: 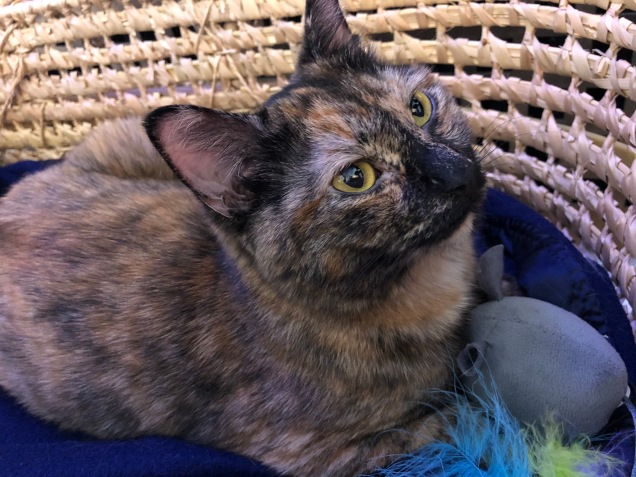 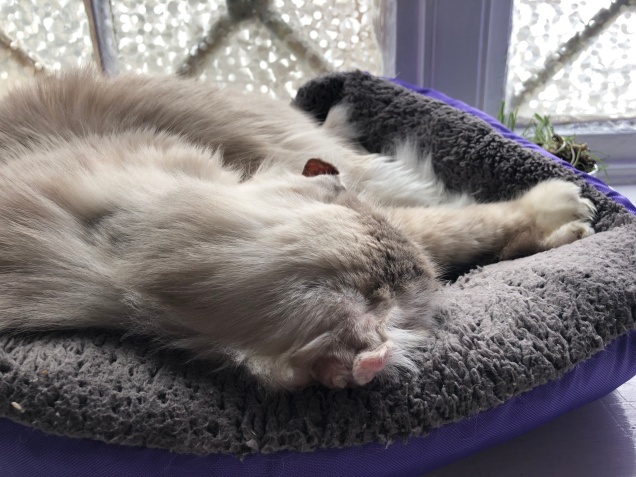 Next I decided I was going to walk along the river towards the Riverside Museum. This was a huge mistake, and I foolishly underestimated how large Glasgow is. It took me an hour to reach the Science Centre, where I was told the viewing Tower was closed due to high winds. From there I continued towards the Museum and I got caught in a downpour… There is nothing to admire on that walk apart from concrete, though I liked the appearance of the bridges and ‘Armadillo’. Disappointed with the Tower closure I went inside the Riverside Museum, which is full of vintage cars, bicycles, locomotives, you name it. Very cool place to take the kids to, and it’s for free. It was sadly too late to visit the tall ship outside: 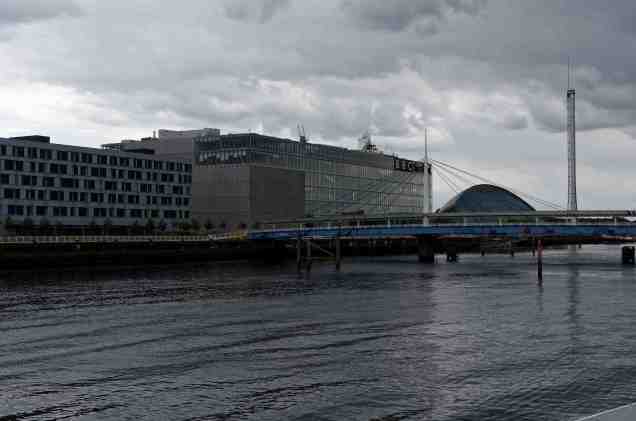 According to Google maps I was 20 min walk away from the Ashton Lane, the most Instagrammable cobbled street in Glasgow’s trendy West End. First though I wanted to have a look at the Hogwarts – like Glasgow University and its cloisters. Because of a wedding photo session taking place I could not take many pics without them in a background. It’s an astonishing building, another ‘must see’ in Glasgow: 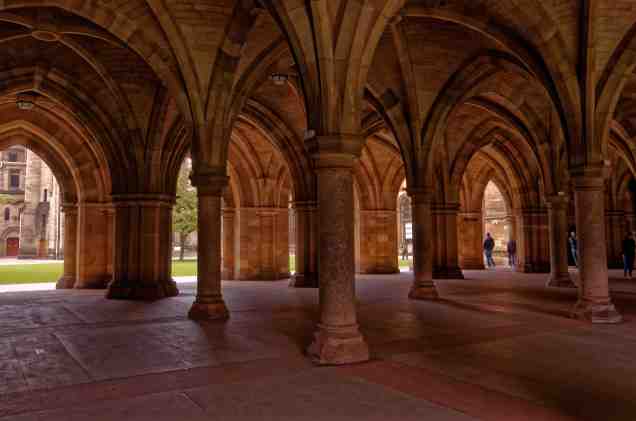 Finding Ashton Lane was somewhat tricky due to all the roadworks taking place. I was surprised how small it was when I finally got there. I hesitated whether to stay and have a pint or not and chose not to. This is definitely a place to come to with friends, to eat, drink and be merry. Similar lanes can be found aplenty all over England so, as pleasant as it was, it did not wow me. But then, I live in Chester where every single street and lane within the Roman Walls is Instagrammable… 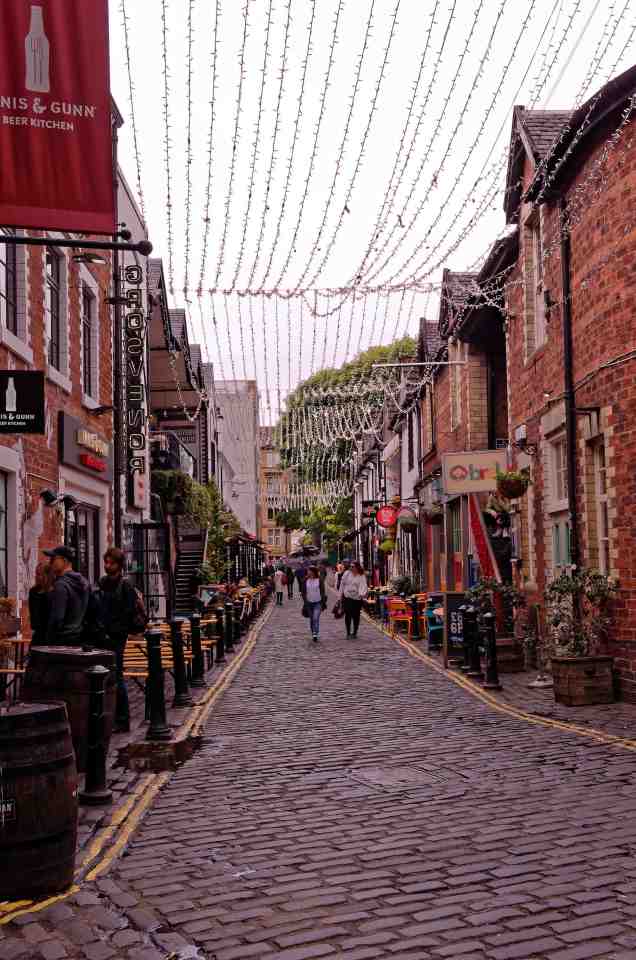 It was afternoon already and my train was leaving at 18:40 so I followed the signs to Kelvingrove Art Gallery and Museum. It had en exhibition dedicated to Linda McCartney and obviously it did not have time to see it. In fact, I did not even get a chance to sit down at their Cafe, because it was already shut at 4 pm. Soon after, I heard an announcement that the museum was about to close…Well, at least I saw the beautiful interiors but really, to close an important attraction so early in June, when the sun does not set until 9:30 pm seems a bit silly. Surely the general public would appreciate if they could spend a nice weekend evening at a museum, some cities even organise museum nights…Disappointed by this, I started walking towards city centre. Again, this was a long, tiring and frankly boring walk, but at least I found yet another mural: 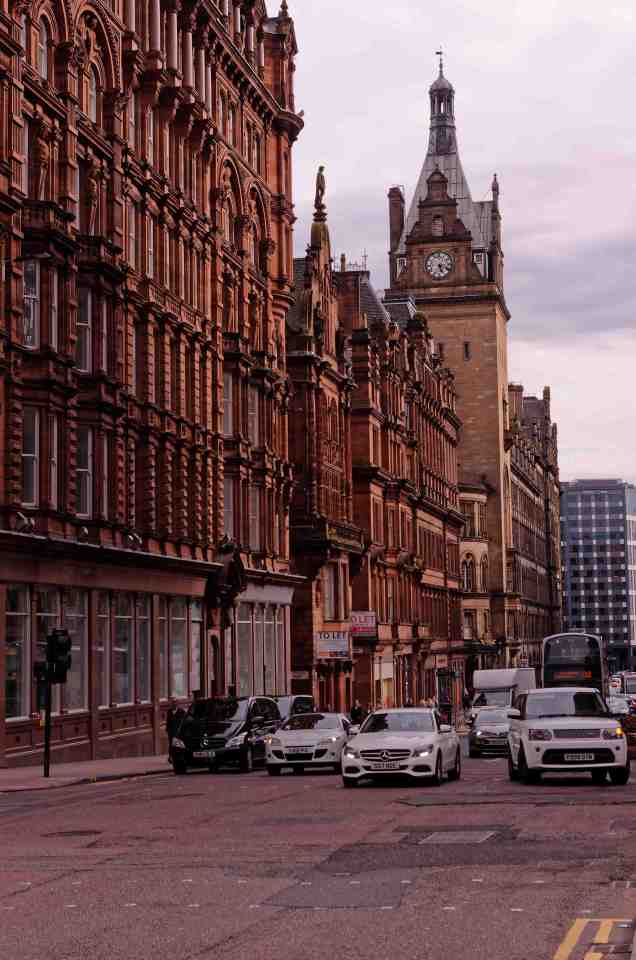 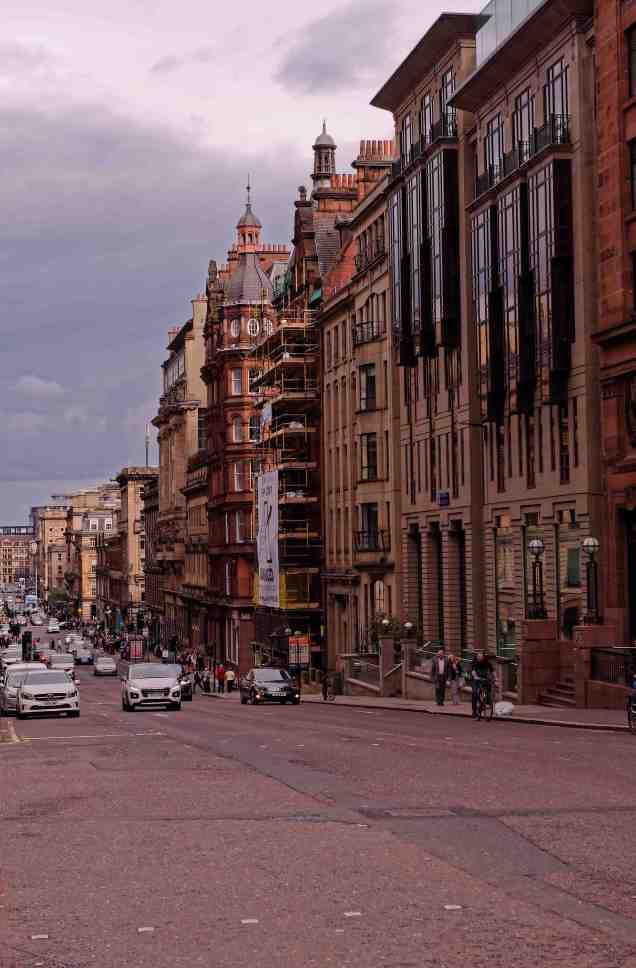 I only just had enough time to have a quick look at the Wellington statue adorned with a traffic cone (and a Scottish flag!) and the mad shopping crowd at Buchanan St. The Willow Tea Rooms I so wanted to visit were just about to close. Orange women on impossibly high heels and men in polyester football shirts started emerging everywhere making the usual noise. That was that for a day. I saw a lot, but at the same time it was all rushed and in a way I did not see much. I should have used Subway rather than waste time on walking everywhere, because Glasgow, while not charming on the whole, has several gems scattered all over it. I did not see the Botanical Gardens or The People Palace. I would have loved to see Pollok Country Park and more Rennie Mackintosh related sites. All of this will have to wait until my next visit, which will happen whenever I snap cheap train tickets again.

PS. I did not understand a word the locals were saying. I had no major problems understanding people in Newcastle. That says something 😉

In the UK since 2007. Fascinated by the beauty of the British Isles and the North in particular. This blog is all about my little adventures.

Jamie Wanders the World
From the Pennines to the Sea.

Journalism and writing from the North of England, by Colin Petch.

These are a few of my favourite things.

Journey with me, through the secrets of the universe and our society, as we strive to generate a more integrated and compassionate world.

Travel treats, trips, trends and more from an award-winning journalist

Follow a Shetlander in everyday life. Is it what you expected?

Yes, it's fiddles and bagpipes. And oh so much, much more...

The Whimsical Adventures of an Intrepid Traveller

Views through a lens - a personal viewpoint

A Scottish travel blog showcasing the best of Scotland

Love From Scotland
We Are Chester